How does Charles Tillman feel about not playing in Super Bowl 50? 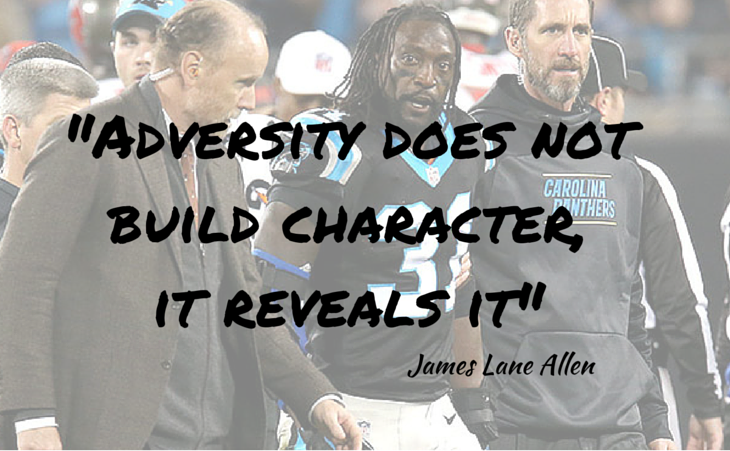 Throughout his illustrious NFL career, Charles Tillman racked up accomplishments that exceeded his own expectations: a pair of Pro Bowl appearances, an All-Pro selection and the Walter Payton NFL Man of the Year award.

All that was left was a Super Bowl ring.

Charles fell just short of that precious hardware at the end of the 2006 season, when the Chicago Bears were defeated by the Indianapolis Colts in Super Bowl XLI in Miami.

Determined to help the Carolina Panthers win it all, Charles attempted to quickly return after partially tearing the ACL in his right knee in November. He was fine for two games, including a brilliant performance (one interception and a forced and recovered fumble) against the New York Giants. But in the season finale, Charles completely tore his ACL.

His season was over.

It surely rekindled memories of injuries past, including his junior year of high school. After a brilliant sophomore year, Charles suffered a hip injury during the preseason and missed a big chunk of the regular season.

Being sidelined as a junior hurt his chances of being recruited by colleges.

In life, we don’t have the luxury to choose the inevitable challenges and setbacks we’ll face. But we do have the ability to choose how we handle them.

“I’m slightly disappointed that I’m not playing, but at the same time, I’m enjoying the process with my teammates,” Tillman told The Advocate. “Just trying to be the best teammate I can be, whether it’s getting water, getting some towels, running errands, helping cats out on the sideline, coaching them up. Whatever I can do.”

He retweeted this scripture…

God is our refuge and strength, a very present help in trouble. -Psalms 46:1

Thanks Charlotte for helping us raise 💵 for the foundation. I appreciate all the love and support. Truly blessed. pic.twitter.com/BEloCNcGqQ

Then, three hours after surgery, he posted a picture on Instagram with his thumbs up.

Needless to say, many noticed…

Charles Tillman had surgery to repair his torn ACL on Wednesday.

He’s out on the field supporting his team today. pic.twitter.com/kHxWFooCNw

And as the final seconds of the Panthers’ NFC Championship game victory were ticking down, Fox cameras captured this moment…

And NFL Network tweeted this…

A very happy @peanuttillman on the sideline.

Not sure any of us will ever have a selfie this cool, @peanuttillman pic.twitter.com/8UivCqgEdC — Jeremy Igo (@CarolinaHuddle) January 25, 2016

I think @kelvinbenjamin and I might be able to suit up on Sunday for #SB50. Whatcha think? pic.twitter.com/vfLZ5xpbOd — Charles Tillman (@peanuttillman) February 3, 2016

And his coaches and teammates are grateful – and better – for it.

“It’s hard to begin to describe what he’s meant to me and, more importantly, this group,” Panthers assistant head coach Steve Wilks, who runs the secondary, told the Chicago Tribune. “His leadership, wisdom, experience was definitely filtered through Josh Norman (and) every other guy in that room. Even when Peanut got hurt, he stayed around the team to talk to the guys. His leadership is tremendous, and my experience with him in the past, I knew what he was bringing, not only what he brings on the field but off the field, his work ethic, his dedication to the game, how he studies the game.”

Above all, though, Charles has displayed character in the face of adversity.