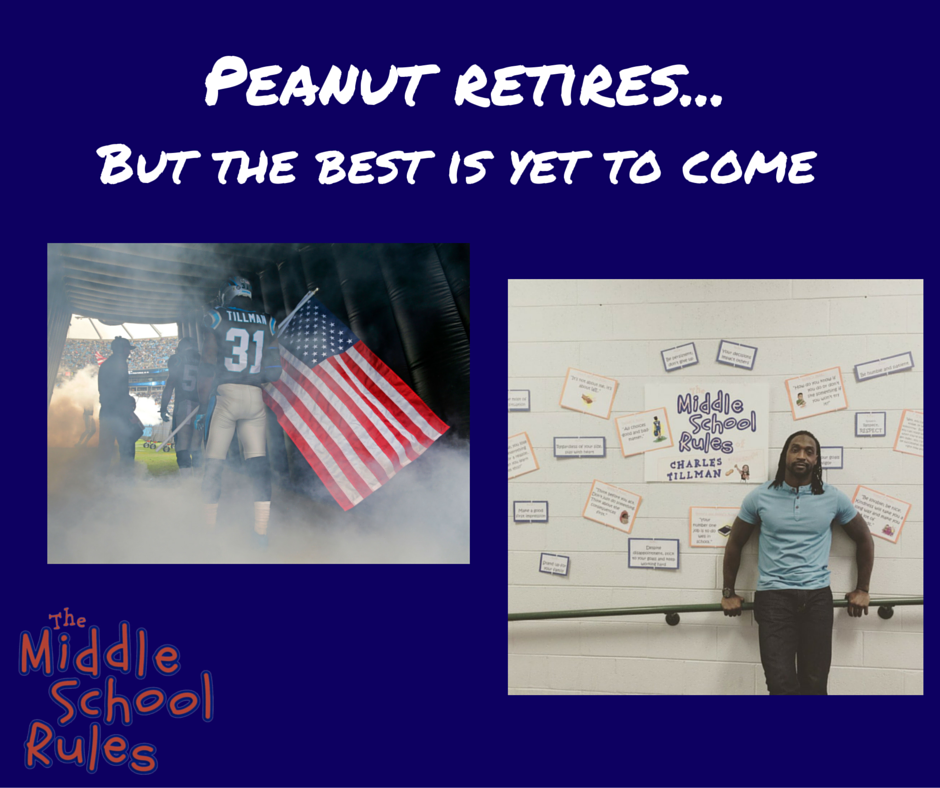 In a style all his own, Charles “Peanut” Tillman retired from the NFL Monday.

I know this: Charles had an elite career, playing a dozen years for the Chicago Bears and establishing himself as the storied franchise’s greatest cornerback by consistently rising to the occasion against other-worldly receivers such as Calvin Johnson and Randy Moss and generating turnovers at a dizzying rate oftentimes his famed “Peanut Punch.”

Fittingly, Charles leaves a fist-print on the football field.

But I also know this: Charles will make an even greater impact now that his playing career is over.

For too many athletes, their on-field success – whether it ends in high school, college or however long in the pros – is the pinnacle of their life. Having gotten to know Charles, I can assure you that will not be a part of his narrative.

He has SO much to offer, and the public has seen glimpses of that, from his commitment to his family, his commitment to community, which was celebrated with his selection as the 2013 Walter Payton NFL Man of the Year, and his commitment to our youth, which I was honored to be a part of in writing The Middle School Rules of Charles “Peanut” Tillman.

But there’s more to come, and I believe Charles will follow the path of other standout athletes who somehow transcended their remarkable on-field feats with even more remarkable off-field endeavors.

For now, though, we can appreciate his creativity by watching his retirement announcement and how universally loved he was by scanning some of the social media notes and posts from a wide range of figures.

Tillman | 2x ProBowler & 2013 WPMOY#ThanksPeanut for being a great representative of the game on & off the field. pic.twitter.com/pfKE9wYpP8

Congrats on an amazing career, Charles. #ThanksPeanut for the memories. pic.twitter.com/Dz32PPTKK3

Charles Tillman is the only NFL player to record 30+ INTs & 40+ FFs (Note: FF data before 1994 is incomplete) pic.twitter.com/KCQg3sfOiF

It's a wrap on an epic career, classmate. Thirteen years, and I'm damn proud to have wi… https://t.co/EPHc75ic9E pic.twitter.com/occiIjuE07

Heard you retired @peanuttillman loved competing against you. You're HOF in my book. #respect #forcedFumbles #class pic.twitter.com/8O840NyweA

Congrats to one of my all time favorite Bears and an all time great @peanuttillman An amazing career for you my brother.

Great player better man. Thanks for setting the bar high for all of us @peanuttillman! https://t.co/mZb5epy0fH

Thank you @peanuttillman, though it was only a year you made an impact on our community in the Carolinas. #AlwaysAPanther #KeepPounding.

You were one of the best to do it fam @peanuttillman it was always a pleasure seeing you play. #ThePunch

@peanuttillman Thank you for visiting! It definitely was once in a life time experience! Congrats and good luck! pic.twitter.com/buqkag9KrN

Growing up watching @peanuttillman always had me more excited to watch the defense than offense take the field. #legend #beardownforever