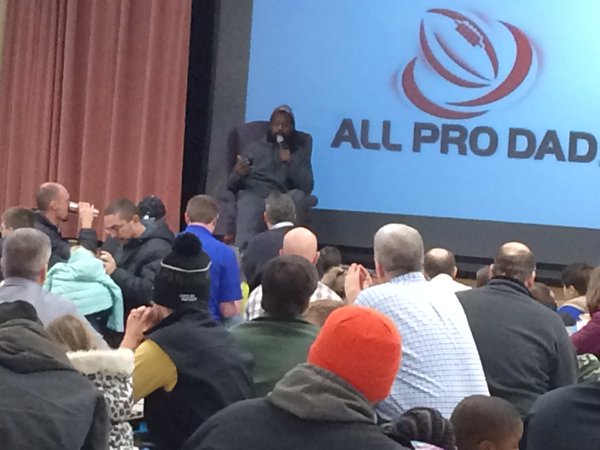 Days after undergoing knee surgery in Houston, Charles Tillman only had one request for his scheduled visit at the All Pro Dad breakfast Tuesday morning.

Despite enduring post-surgery pain and needing crutches, Charles inspired dads and their kids at Smithfield Elementary School in South Charlotte.

“It was amazing how quiet they were,” Smithfield principal Allison Plunkett told WBTV. “They were extremely engaged. He’s a great speaker.”

Charles answered questions about The Middle School Rules of Charles “Peanut” Tillman, demystifying the perception that professional athletes are – and were – invincible.

“When you look at an athlete, you think that athletes are just super tough and strong, which we are, but we weren’t always tough and strong,” Charles said, according to Time Warner Cable News Charlotte. “At one point in time, we were small kids.”

Lee Northcutt has two children at Smithfield Elementary, and he appreciated Charles’ visit.

“This is a message for all of us: The choices, the decisions and the consequences,” Northcutt said. “That’s a great motto for all of us to live by, and I hope my two guys will always remember that.”

Check out this video feature from WSOC TV below:

Charles wasn’t done; in the evening, he visited with children at the Morrison Regional Library in Charlotte. Once again, Charles was a hit…

Gotta love it! Not even a week removed from ACL surgery, @peanuttillman hanging out with the kids @wsoctv pic.twitter.com/bWOdKFWMJH

@peanuttillman I'm 40, I can't remember an athlete as appreciative of his fans and as committed to making a difference in kids lives as you.

Thank you @peanuttillman for such a motivational speech. Plyler left with big dreams! pic.twitter.com/C1cBxFexVq